When was the last time you got really excited about a new Apple product?

I remember counting down the days to a new keynote like a 5-year-old waiting for Christmas Eve.

I was waiting for Steve Jobs to say the three magic words: “one more thing”. And then watch the crowd go mental while Steve Jobs presented Apple’s innovative new product that would go on to change the world.

Did I count down the days before the last keynote? No. I completely forgot about it. I was probably busy cooking dinner or walking my dog or something.

I am not alone. It seems like the excitement around Apple has fallen over the past couple of years.

Apple has millions of fans all over the world, and there is a reason for that. Apple has always made innovative, well-designed products that have changed the way we use technology.

However, since Steve Jobs passed away in 2011, Apple has only released one truly new product: the Apple Watch in 2014. This was six years ago.

Now that the legendary industrial designer, Jony Ive, no longer works at Apple, it is obvious that Apple is a different company now.

Why has Apple changed? Does the company still know how to innovate?

To understand this, we have to take a brief look at the history of Apple.

The history of Apple

1. The Steve and Steve Era

Steve Jobs and Steve Wozniak founded Apple in a garage in San Fransisco in 1976. The following year, their first mass-produced product hit the market: the Apple II. It had a text-based interface like all computers back then. This means that the user had to write commands to tell the computer what to do.

Apple released their next computer, Lisa, in 1983. The Lisa was exceptional because it was the first mass-produced computer to feature a graphical user interface and come with a mouse, like the computers we use today. However, the Lisa also featured a pretty hefty price tag of 10.000 USD, so it didn’t sell well.

Lisa was replaced with the Macintosh. The new computer was cheaper and had the same revolutionary graphical user interface as the Lisa, but a better designed physical appearance. The Macintosh became extremely popular because it was easy to use and was available at a more approachable price.

Steve Wozniak quit Apple in 1985, and Steve Jobs was pushed out later that year. Now Apple was without its founders and run by John Sculley and a group of businessmen.

In this period, Apple released a lot of products. Apart from desktops, laptops, and PDA’s, Apple also put out a gaming console, a CD player, and a TV.

The new strategy was to make as many products as possible. There is nothing unusual about this. Many companies like Samsung and Sony have done this for decades.

Windows had a user interface that was similar to Apple’s revolutionary Macintosh interface, but Windows could run on any PC. Even the really cheap ones.

Now, everybody used PC’s with Windows, the sales of the Macintosh decreased, and most of Apple’s new products failed.

3. The Return of Steve Jobs

Threatened by bankruptcy, Apple bought a company called NeXT in 1996. NeXT was founded by Steve Jobs and made powerful computers for universities and professional use. Along with the company, Apple got Steve Jobs back. 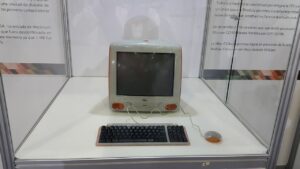 The computers were well designed and looked fresh and different from the competitors’ products. At the time, most PCs were boring, grey boxes.

In the last 10 years of Steve Jobs’s life, Apple released three products that all changed how we use technology:

After a long battle with cancer, Steve Jobs passed away in 2011, and Tim Cook became Apple’s new CEO. Since 2011, we have been presented with updated versions of Apple’s bestsellers: iPhones, Macs, iPads, etc. in different sizes and colors. The company also released a new product: the Apple Watch.

Tim Cook and co. bought Beats by Dre from Jimmy Iovine and Dr. Dre and released Apple Music. Then came the HomePod, the AirPods, and Apple TV+.

In 2019, Apple experienced their first decline in revenues and profits in a decade.

Lessons from the History of Apple

First off, we can see that Apple has had the greatest success with Steve Jobs in charge. The products that defined Apple were all released in the two Jobs eras.

Apple made fewer products, but the ones they made were new and unique. In the 80’s you could not get the Macintosh experience from any other company. In the 90’s you could, thanks to Microsoft.

Now, many companies like Samsung and Huawei offer alternatives to the iPhone and the iPad.

What can we learn from all of that?

What made Steve Jobs’s approach different from John Sculley’s or Tim Cook’s?

To understand this, we have to look at how Apple approached innovation under Steve Jobs compared to now.

Radical innovation means designing something completely new. It’s going from nothing to the iPad. It can either be done by designing and developing a completely new kind of technology or by changing the meaning of a product. Like the way the iPhone changed how we define what a phone is.

Most tech products need incremental innovation to keep up to date. However, when we think of truly innovative companies, they have usually made products that are the result of radical innovation.

Apple is a company with a long history of radical innovation: the Lisa and the Macintosh, the iPod, iTunes, the iPhone, the iPad, and the Apple Watch. That is why we love Apple so much.

However, radical innovation is generally seen as risky. A lot of resources go into putting a new product like the iPad on the market, and since nothing like the iPad existed, how could Apple know that it would take off?

It is safer and easier to create your own spin on an existing product. Since Tim Cook took over, Apple has relied almost exclusively on incremental innovation, except for the Apple Watch.

The rest of the new products have either been updates of Apple’s existing product lines or products like the HomePod, which is aimed at competing with products like Amazon’s Alexa. This is also the case with the company’s subscription services Apple Music and Apple TV+, which are created to compete with Spotify and Netflix respectively.

If you want to learn more about incremental and radical innovation, I highly recommend this article by Donald Norman and Roberto Verganti.

Jobs was passionate about design. He worked closely with the designer Jony Ive as well as the design agencies IDEO and Frog Design.

Design was at the core of Apple, but now it seems like the market dictates what products get made.

A way to see if a company is design-driven is to look at the management:

How much influence does the designer with the highest rank have?

Does that person report directly to the CEO?

Until recently the answer to the latter has been yes: Sir Jony Ive. His position even changed from Sr. Vice President to Chief Design Officer. Now, however, Ive has left Apple to start his new agency with Apple as a client.

Ive had been dissatisfied working at Apple, which resulted in him skipping meetings and showing up late to the Apple office. There have been accounts that Cook’s disinterest in design was the main reason for Ive’s dissatisfaction.

Steve Jobs was creative, very passionate about design, and embraced new and crazy ideas. Tim Cook is a great CEO for a company the size of Apple, but he lacks Steve Jobs’s creativity and courage.

A company driven by the market looks at the competition and asks a question like: How can we create something to compete with Samsung’s new product?

A design-driven company is more concerned with creating something that adds value to the users’ lives and would rather ask a question like: How might we use this new multi-touch technology to improve our users’ lives?

Roberto Verganti’s book, Design Driven Innovation, is highly recommended for a deeper dive into this subject.

What’s Next for Apple?

Apple gives us what we want, and that is the problem.

Henry Ford famously said: “If I had asked people what they wanted, they would have said faster horses.”

As long as Apple continues with this approach, we will keep getting faster iPhones.

Today, companies like Microsoft have the courage to do radical innovation. Microsoft’s new desktop computer, Surface Studio, combines the format of the desktop with the flexibility of a tablet. Microsoft is redefining what a desktop computer can be.

As a consequence, Microsoft is going after Apple’s original target audience, the creative professional, by releasing a product that is designed for supporting creative work like architecture, design, and photo-editing.

If Apple isn’t shaping the future of technology, someone else will. What Apple is doing now, looks a lot like what they did in the ’90s.

The next big thing will most likely not come from Apple.

Apple’s reputation as the leading innovator in their industry is at risk.